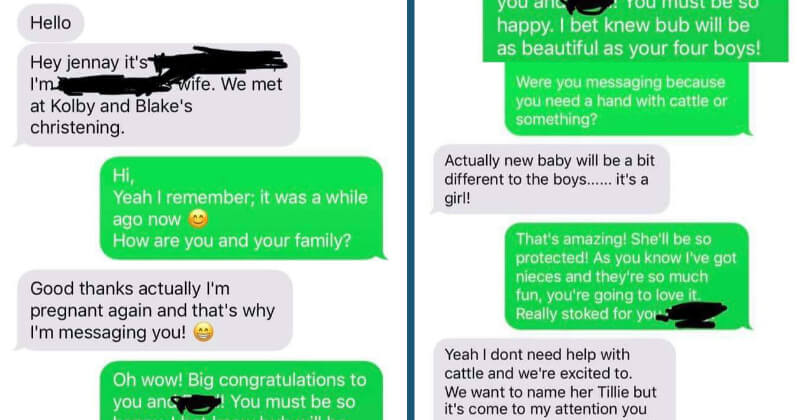 Pets are like babies to their owners, without a doubt. Pet parents always try their best to provide their furry kids with the best things. They love their pets unconditionally, just like parents love their children. That’s why they prioritize their babies over anything else and protect them at all costs. Therefore, you can’t expect a dog owner to change their pup’s name just because you want that name for your kid.

The Reddit user u/fozzythemexican posted on the subreddit r/ChoosingBeggars/ the exchange between her and an entitled woman who asked her to change her dog’s name. From the screenshots shared by the poster, we could see that the woman announced that she would be having another baby, and it was a girl. The dog owner felt happy about the good news. She congratulated and even offered help to the woman. However, she was shocked when receiving a request to change the name of her dog, Tilly, for the sake of the woman’s daughter. The mother wanted to name her kid Tillie, but she disliked the idea that her kid would have the same name as a pup. Apparently, the dog parent thought it was ridiculous, so she politely refused to change Tilly’s name. She explained the reason for the woman, hoping the mother would understand and accept it. Unfortunately, the woman lost her temper and threw a fit at the Redditor. She criticized the poster for not sympathizing with a mother’s concern and being heartless and cold. She felt disappointed and blamed the dog owner for numerous potential consequences her child may face in the future. The poster then replied in a cool and calm way, though she emphasized that she wouldn’t accept the request. In response to the well-meaning congratulation, the woman continued to chew the dog parent out with offensive words. She even threatened to tell other friends about the story to make the Redditor feel guilty.

In the comment below the thread, netizens sided with the dog owner and slammed the entitled woman. Many shared that their pets had the same names as their friends or family members, which was totally fun and normal.

Some asserted that the woman was absurd when asking others to change their pet’s name instead of choosing another name for her child. The dog got the name first, so the one who should change anything was her.

Have you ever encountered someone so entitled as the woman in the story above? What would you do if you were in the dog owner’s shoes? Let’s share your view below, and don’t forget to follow us for more mind-blowing threads!