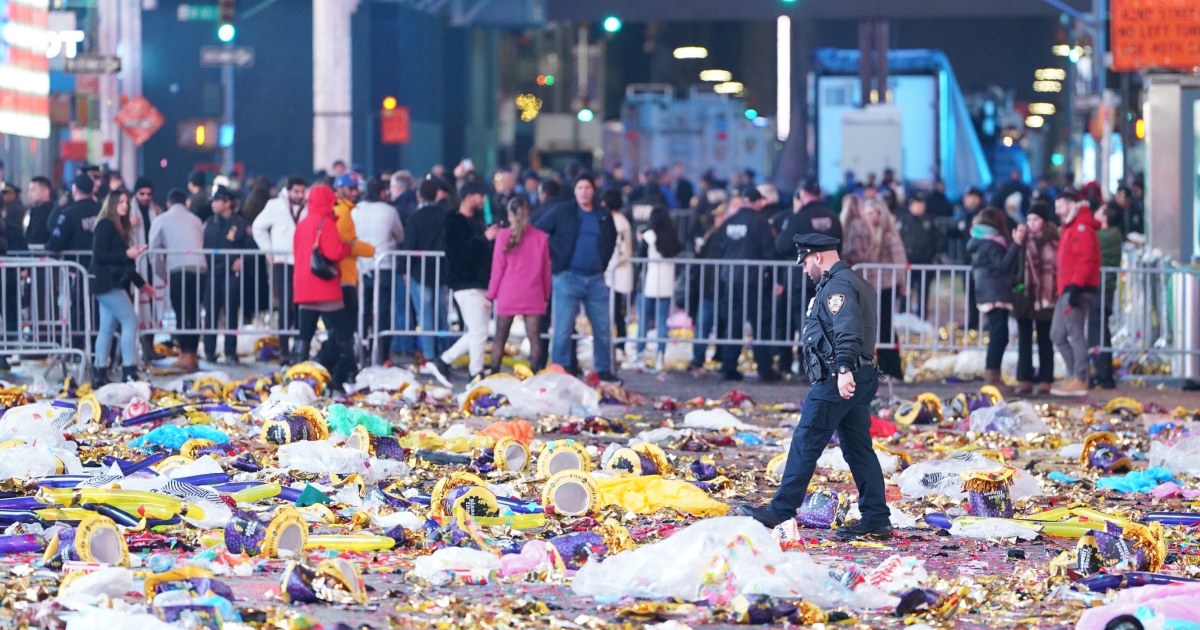 The attack happened shortly after 10 p.m. at West 52nd Street and 8th Avenue, just outside checkpoints for the high-security zone set up for celebrants, officials said at a news conference early Sunday.

Three law enforcement officials with direct knowledge of the investigation said late Sunday that authorities were looking into whether the suspect reached for one of the officers’ service weapons during their takedown. The injured police were out of the hospital and expected to recover.

Authorities identified the suspect at the news conference only as a 19-year-old man. Four senior law enforcement officials said the man is Trevor Bickford of Wells, Maine.

The suspect was known to federal agents, who interviewed him in mid-December after a relative alerted them to his revolutionary support for Islam, four law enforcement sources briefed on the investigation said.

His name is in a federal law enforcement database, they said, and he was known to investigators for his social media postings. Bickford does not have a criminal record, the four officials said.

The man, who made pro-jihadist statements from his hospital bed overnight, is believed to have traveled from Wells to lower Manhattan on Thursday mainly via Amtrak, those sources said.

Investigators were probing whether he stayed at a homeless shelter downtown, the four officials said.

A diary found by investigators may have indicated the suspect believed he was on a suicide mission: He left notes about who would inherit belongings and where he wanted to be buried, the sources said.

The suspect said in the diary he regrets disappointing his mother; he also wrote that he wanted his brothers to join him in his fight for Islam, they said.

He had expressed some desire to travel to Afghanistan in the past, the officials said. Terrorist-related propaganda and personal writings were found in his backpack, they said.

Neighbors told NBC affiliate WCSH of Portland, Maine, that the suspect is the child of divorced parents and has two siblings. He recently worked at an area country club as a groundskeeper, they said.

Bickford was a 2022 graduate of Wells High School, where he wrestled and played football, according to the station.

Multiple law enforcement officials said they were looking into whether the attacker traveled to New York specifically to target police on New Year’s Eve.

The New York Police Department has seen other lone wolf terrorist-type attacks on officers. In Jamaica Queens in 2014, a radicalized man named Zale Thompson attacked three officers without warning with a hatchet, nearly killing one of the officers. In June 2020 in Brooklyn, Dzenan Camovic stabbed an officer in the neck, stole his gun and used it to fire at responding officers in another jihadist-inspired lone wolf attack.

In Saturday’s attack, the officers were initially hospitalized, one with a fractured skull and another with a bad cut, Sewell said. On a later call, officials said all three officers had been released from Bellevue Hospital overnight.

Mayor Eric Adams said at the news conference that he had spoken to one of the wounded officers. “He understood that his role saved lives of New Yorkers today,” Adams said.

The investigation was still in its early stages.

Neither the FBI nor New York police were on the lookout for any other suspects, officials said.

The police department mounts a massive security operation every year during New Year’s Eve celebrations, deploying thousands of officers in the area around Times Square.

Officials expected as many as 1 million people to crowd the area. Police did not have a more exact number Sunday.

Crowds are not allowed access to the blocks to see performances and the midnight ball drop without being screened at checkpoints where officers use metal-detecting wands to screen for weapons.

Large bags and coolers are banned from the area, while barriers are set up to prevent vehicle attacks in the secure area.

Myles Miller is a reporter at WNBC-TV.