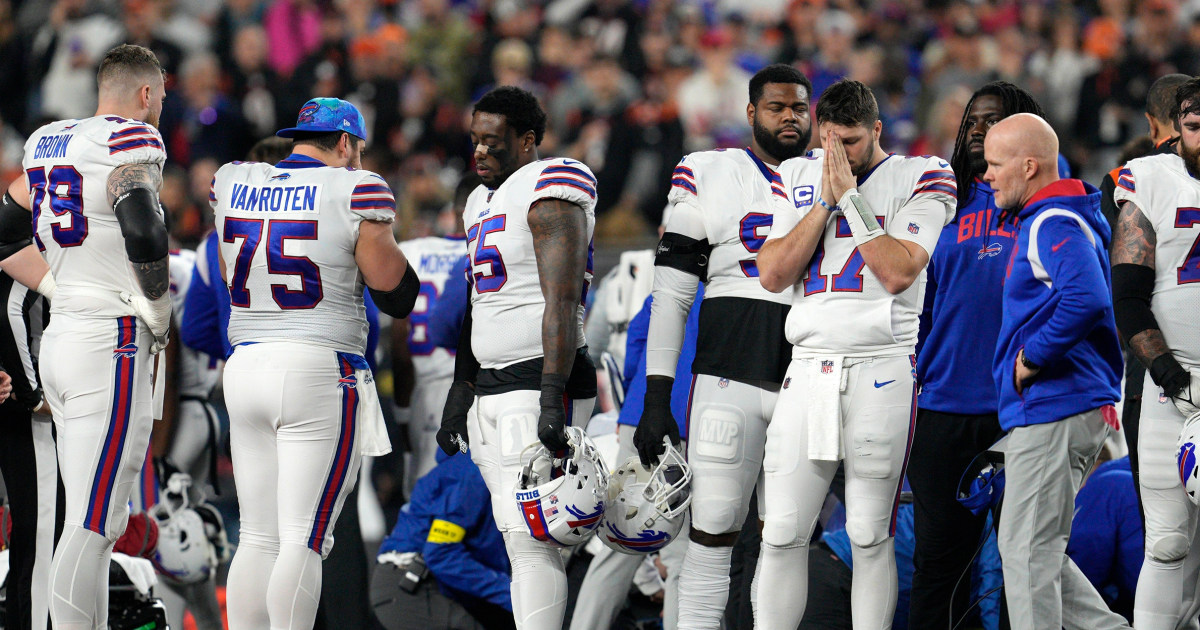 Buffalo Bills safety Damar Hamlin was in critical condition at a hospital after collapsing after he made a hit in the first quarter of “Monday Night Football” against the Bengals in Cincinnati, officials said.

As trainers surrounded Hamlin, an ambulance arrived on the field. Hamlin received CPR for at least nine minutes, the broadcasters said. Emotional players and coaches stood by, and the Bills knelt to pray.

Hamlin was taken to University of Cincinnati Medical Center, the announcers on the ESPN broadcast said. Family members were with him, they said.

An NFL statement said that Hamlin, 24, was in critical condition.

“Our thoughts are with Damar and the Buffalo Bills. We will provide more information as it becomes available,” the NFL said.

The game was suspended and then postponed. Both teams left the field to their locker rooms following the incident.

The ESPN broadcast team calling the game and their colleagues in the network studio were also emotional.

“Monday Night Football” is an ESPN production that airs on ABC.

Hamlin made a hit on Bengals wide receiver Tee Higgins, stood up and then fell over on his back.

The Buffalo Bills tweeted “Bills Mafia is with you, @HamlinIsland,” referring to the player and a name for Bills fans. The Bengals were among the teams that responded with an emoji of hands in prayer.

In a game in which players do sometimes suffer serious injuries, the apparent gravity of the situation was called unprecedented on Monday’s broadcast.

The game was suspended with 5:58 minutes left in the first quarter. The NFL officially postponed the contest shortly after 10 p.m. ET.

The NFL Players Association, which is the players union, tweeted that “The NFLPA and everyone in our community is praying for Damar Hamlin.”

“We have been in touch with Bills and Bengals players, and with the NFL. The only thing that matters at this moment is Damar’s health and well being,” the union said.

Hamlin is a native of McKees Rocks, Pennsylvania, which is near Pittsburgh, and he was drafted in the sixth round of the 2021 NFL draft.

The Pittsburgh Steelers also tweeted “We send our thoughts and prayers to Damar Hamlin, his family,” and the Buffalo Bills.