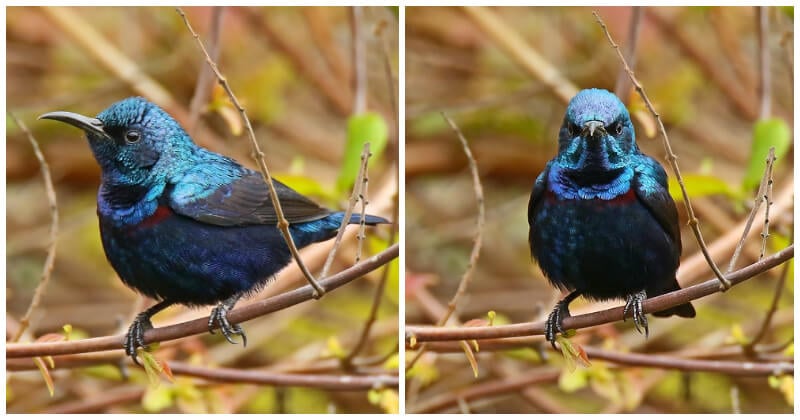 Birds never let us down with their stunning appearance. Besides colorful species, most people also have a deep affinity for critters with a glittering look. That’s why you will find it hard to put your eyes off the glorious purple sunbird. This species is also known by the scientific name Cinnyris asiaticus. It is only 10-centimeter long with a square-ended tail. The male stands out with brilliant metallic blue and purple plumage, darker on the upper parts, and dark brown wings. Its purple-back under part makes the bird look like its cousin, the Lotens Sunbirds. The male individuals will display their yellow pectoral tufts during the mating season to attract partners. Like many other birds, the female purple sunbird looks much duller with olive-brown feathers above a yellowish breast and belly. There are also pale supercilia above their eyes. Male individuals have the same appearance as females until they become mature. This beautiful species is native to thin forests and garden land in South and Southeast Asia. Sometimes they can be found in western parts of the Arabian peninsula. In the breeding season, the male displays a unique dance by raising his head, fanning his tail, and exposing his pectoral tufts. The performance is associated with a song to draw females’ attention. The female takes charge of collecting cobwebs, thin strips, and barks to form a nest. The male also supports from time to time during the building process. The female often lays 2 eggs, which will hatch after 15 to 17 days of incubation. The couple will both find food for their babies. Astoundingly, sunbirds can live about 22 years in captivity. Fortunately, the bird population hasn’t declined to an alarming level, so it is in the group of the Least Concern on the Red List. Have you ever seen this incredible little bird in real life? Do you know any bird that has a similar appearance to the purple sunbirds? If you want to share various birds you’ve ever seen, feel free to leave comments in the section below!