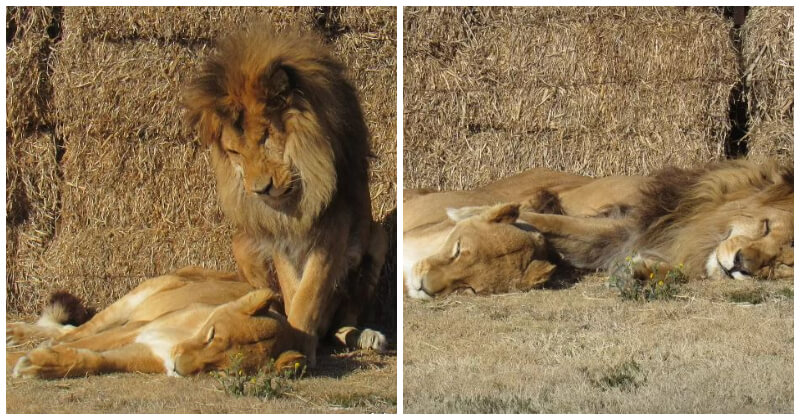 It is apparent that maternal and parental relationships are sacred, and not only humans have such feelings. There are thousands of videos and stories about the strong bond between parents and children of other species. Aside from parenthood, however, the intimate relationship between the husband and wife of some animals also astonishes us. The story below about the love and care of a lion husband will definitely melt your heart.

The pair of lions, Leo and Muñeca have been together most of their lives. Animal Defenders International (ADI) rescued them and their children from a circus in Peru in 2014. They were barely apart except for a short time during the rescue. “Leo and their sons, Chino, Coco, and Rolex, were successfully removed during a raid on the first day of the mission in August 2014, but the circus blocked the seizure partway through and then went into hiding,” Jan Creamer, president of ADI, shared. “ADI caught up with them six months later and over 600 miles away, saving Muñeca and their daughters, Africa and Kiara … They were almost always together, exploring their 4-acre habitat and resting together under the trees.” The male lion, Leo, has always looked after his wife, and he became even more protective over her since she felt sick in August. He stayed by her side nearly every moment and tried to cheer her up.

“Leo has always watched over Muñeca, but when she became unwell, he clearly realized something was wrong,” Creamer said. “He was seen trying to encourage her to eat her food, and appeared to comfort her.” While Muñeca was indisposed and ill, Leo stood aside and watched over her. The lion husband comforted his wife and expressed his love for her by cuddling with her. Those who witnessed the pair can’t help but become emotional and pity the lovely animals.

“We have seen the closeness between lion companions and the bonds they share on many occasions,” Creamer remembered. It is believed that cuddling enhances lions’ social bonds, and that’s what Leo and Muñeca have done thousand times during their years together. Sadly, Muñeca breathed her last in September at 19 years old. Her husband was with her until the last moment, letting her know how much he loved her. Leo has mourned his partner’s death since then, which broke the heart of many rescuers. The caregivers have given him extra treats and care to help him overcome the distress. Let’s hope he can get his spirit back soon!

What do you think about the passionate love of this lion couple? Have you ever seen such a strong bond between animals? Please comment your thoughts down below and follow our website for more heartwarming stories!