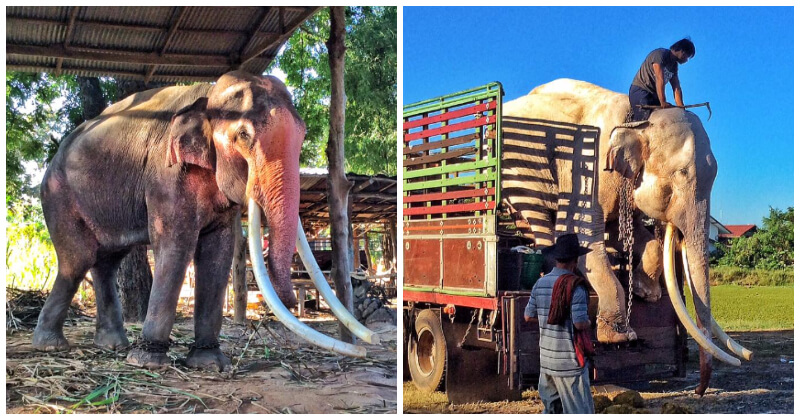 Do you know that some species have a fantastic level of intelligence? Elephants, despite their tremendous bodies, are one of the most clever and gentle animals on this planet.

Sadly, their ability probably does more harm than good as many of them are exploited for entertainment. Many are captivated and trained to perform in circuses, especially in countries with a large number of elephants such as Thailand. The Thai bull elephant Thong Bai is famous for spending nearly his entire life entertaining tourists. During the last 40 years, this privately owned elephant has worked in multiple Thai commercials, movies, and weddings. Lek Chailert, the founder of the Elephant Sanctuary, shared on his page the story of Thong Bai: “More than forty years, he has served people, and he deserves his freedom.” The elephant is watched over by the sanctuary at the moment. Lek invited Khun NuNa Silpa-archa there one year before Thong Bai was released to look after him and other elephants. NuNa was heartbroken when she saw the poor animal, so she tried her best to comfort him.

“After she saw him, she began to seek a way to help him and to bring him greater respect and freedom,” Lek said. After struggling with numerous challenges, Khun Nuna Silpa-Archa finally succeeded. It took about a year for her to remove all the chains from Thong Bai. The owner of Thong Bai and the elephant advocates had discussed and reached a consensus that the senior elephant would have his own place to live freely. His new home is included in the Surin Project, whose’s mission is to improve the living conditions for elephants. The shelter was funded by the Thai Beverage Company, while land maintenance was handled by the Surin government. The famous elephant’s residence is equipped with a fountain, lots of mud, shade, and some walking spaces. Thong Bai can roam freely in safety without working or restrains. “The day that everyone longed for has finally arrived. Over four decades of shackles and at last release,” writes Lek. “Thong Bai, the Legend of Surin, is free from his chains. We welcomed him to his new home today. He appeared uncertain and nervous about his new freedom and even shy to explore without being told what to do.” Thong Bai is only one among many elephants that lose their freedom and have to work for humans’ benefit. It is apparently cruel for this benign creature to suffer such a miserable life. Please share this story with your friends and families to raise public awareness about animals’ welfare. Leave your thoughts down below and follow us to get access to the latest news!