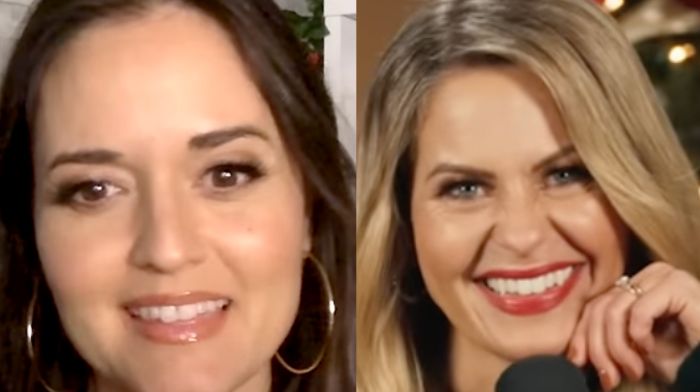 Candace Cameron Bure has found herself in hot water in recent weeks for comments she made defending traditional marriage, and one of the few celebrities to stand by her in the wake of this scandal is the former “Wonder Years” star Danica McKellar.

While appearing on Cameron Bure’s podcast this week, McKellar spoke out to thank the former “Full House” star for helping her find God.

McKellar Thanks Cameron Bure
“Candace, I don’t wanna brush over the huge, huge impact that you’ve had on my life this year,” McKellar said, according to CBN News. “I don’t even know how to call that like friendship, it’s more than that. Because of you helping me to find my relationship with God and Jesus, it’s been like a revolution in my life. It’s been a revelation in my life.”

“You gave me this Bible that I read all the time and I love it so much and I go to church now and I just, I talk to Jesus all the time every day. It’s unbelievable,” she continued. “And you were like my guide. You were just an angel in my life and you still are. And I just wanna thank you for that publicly.”

McKellar, 47, had admitted earlier this year that she found God later in life, as she had been skeptical about Christianity for years.

“It all started one evening when I was struggling with the idea of forgiveness and DM’d my good friend @candacecbure about a passage from the Bible she had read on her instastories, and then she sent me a Bible, and invited me to church,” McKellar said in a video posted to her Instagram page.

“I can tell you I’m experiencing a relationship with God and Jesus that I’ve never had before, and it feels miraculous,” she later added.

Cameron Bure, 46, was quick to comment on the video to double down on her support for McKellar and her spiritual journey.

“God’s love is bigger than any human love and when He sweeps you up in understanding how powerful it is, because He is, it’s undeniable,” she wrote. “Praying for you on your journey and relationship with Jesus my sweet friend.”

McKellar Wants To Help Others
During her latest appearance on Cameron Bure’s podcast, McKellar expressed her hopes that she can help others find the joy that she has found in God’s love.

“That’s my wish right along with you,” Cameron Bure replied. “Thank you for sharing your journey of faith and I’m in prayer alongside you always and encouraging you to share that because there are moments of hope for people and you don’t have to have it all together or know all the answers. You just have to take one step every day. I just love seeing it and I’m just cheering you on along the way.”

McKellar Defends Cameron Bure
Cameron Bure has come under fire in recent weeks for saying that her new network Great American Family “will keep traditional marriage at the core.” Neal Bledsoe, who starred with McKellar in the GAF movie “Christmas At The Drive-In,” responded by cutting ties with Great American Family. McKellar, however, instead decided to put herself out there to defend Cameron Bure when she needed it most.

“Neal is a wonderful person. He’s such a great actor, and I have enjoyed working with him so much,” McKellar told Fox News. “He and I both share our love and support of [the] LGBT community, for sure. You know, I don’t agree with his interpretation of her comments. I just didn’t see them the same way”

“When she was talking about the portrayal of heterosexual couples in the movies, she started the sentence with ‘I think,’ which is not definitive, and she ended it with ‘at its core,’ which doesn’t mean exclusively,” she continued.

McKellar and Cameron Bure clearly share a beautiful friendship. We’re so glad that Cameron Bure was able to help her friend find God, and we hope McKellar continues to find comfort in her faith in the years to come!