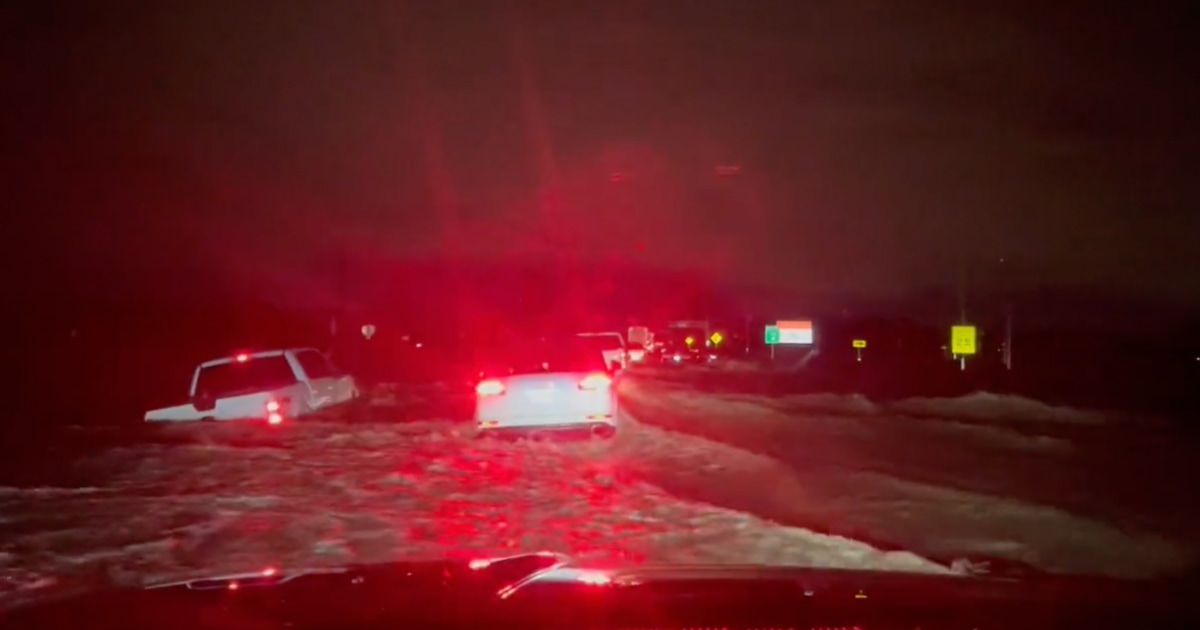 A Pacific storm fed by tropical moisture blasted California’s capital with rain over the weekend and may have contributed to at least three deaths in the West, officials said.

Sacramento seemed to get the worst of the winter front’s atmospheric river — a long, narrow band of moisture drawn from the tropics — with widespread flooding, the closure of a key highway and one of the deaths.

Sunday afternoon, mandatory evacuations were activated for residents of the Point Pleasant community south of the city of Sacramento, Sacramento County officials said. They expressed concern that any need for floodwater rescues in the area would be complicated by the darkness after nightfall.

“Flooding in the area is imminent,” the Sacramento County Office of Emergency Services said in a statement. “Floodwaters become incredibly dangerous after sunset. Please be out of the area and off the roads while there is still light to reasonably see any danger.”

Three breaches of a levee adjacent to the Cosumnes River in the community of Wilton have been reported since the storm first struck the area Saturday, contributing to fears of possible flash flooding in those low-lying communities, she said.

Cellphone video from the area showed multiple vehicles with water up to their windows and higher Sunday. NBC affiliate KCRA of Sacramento reported that dozens of motorists have been rescued from vehicles stranded in high waters in Sacramento County.

Flash flood warnings remained in effect for multiple communities south of the capital until further notice, according to the National Weather Service.

On Sunday, first responders discovered a body in a vehicle that was submerged in floodwater on or near Highway 99 at Dillard Road, south of Elk Grove, KCRA reported.

The cause of death and the identity of the deceased were unavailable, and the Cosumnes Fire Department did not immediately respond to a request for information.

Parts of Highway 99, including a more than 1-mile stretch south of Elk Grove, have been closed since Saturday night, according to the California Department of Transportation, or Caltrans. The highway wasn’t expected to reopen until Monday afternoon or later, Caltrans said.

Sunday night, amid multiple vehicle spinouts, the California Highway Patrol stopped eastbound traffic on Highway 80 along the Donner Summit northwest of Lake Tahoe. Snow was clinging to the shoulder, but officials were allowing motorists to make the trip without snow chains.

Highway 50 east of Kyburz was reduced to one lane in each direction after boulders struck the highway overnight, Caltrans said.

The storm’s effects were felt from the U.S.-Mexico border to Northern California, even as it moved east into the Rocky Mountains.

Although the last three years have been the driest in state records, the atmospheric river provided snow in the Sierra Nevada mountains, the state’s natural storage locker for water. The National Weather Service said Sunday that nearly 10 inches of snow fell at Reno-Tahoe Airport in Nevada. The facility on Saturday reported “heavy snow fall” that was causing flight delays and cancellations.

By the end of Saturday, downtown San Francisco had recorded more than 5 inches of rain, a one-day amount bested in the history books only by a deluge in November 1994.

Nearby Oakland, however, set its one-day record by scoring 4.75 inches of rain, the National Weather Service said. The number beat the record set in 1982.

At Lighthouse Field State Beach in Santa Cruz County, about 80 miles south of San Francisco, the body of a 72-year-old man was found under a fallen 120-foot cypress tree Saturday afternoon, park officials said. The victim’s name was not available.

In Breckenridge, Colorado, on Sunday afternoon, a man and his adult son hiking and skiing in a backcountry area outside Breckenridge Ski Resort boundaries were felled by an avalanche, the Summit County Rescue Group said in a statement.

The father was able to escape and call for help, but when rescuers arrived they found the son buried in snow and deceased, the group said.

Experts said the new year’s first week will bring more wet weather to the West via storms brewing in the Gulf of Alaska and fed by tropical Pacific precipitation.

“Precipitation chances will ramp up again Monday and Tuesday as a series of Pacific Storm systems continues to impact the region,” the National Weather Service said.