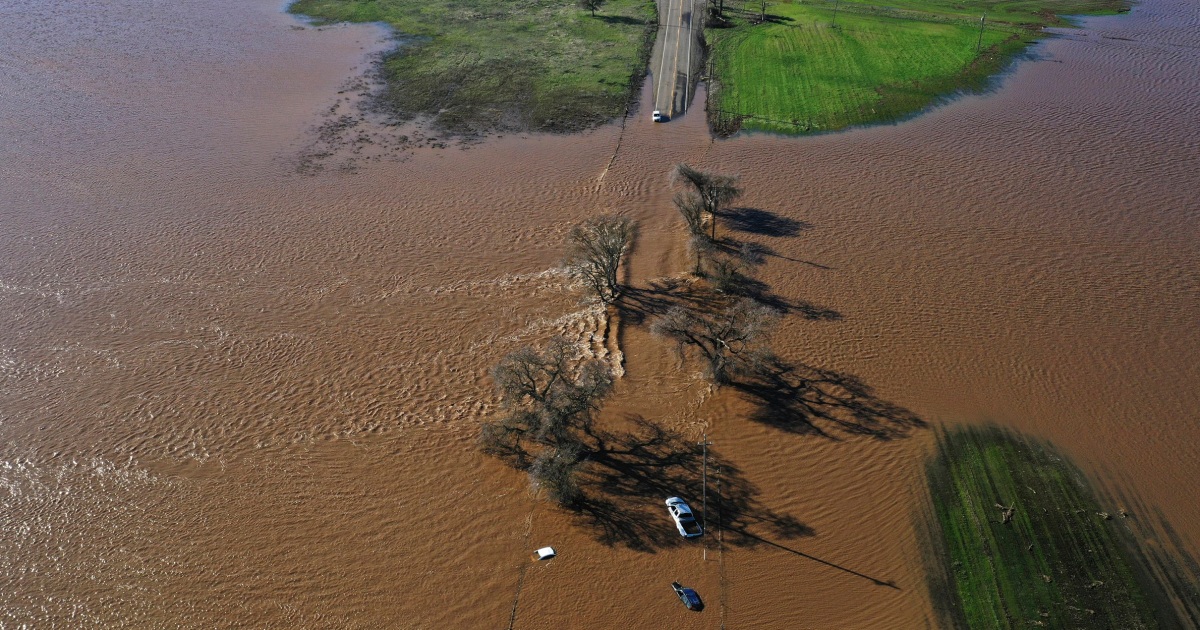 LOS ANGELES — Millions of California residents recovering from a deluge that killed at least one person over the weekend and contributed to flooding, mudslides and power outages are bracing for the arrival of another atmospheric river, a long, narrow band of moisture drawn from the tropics.

Flood watches are in effect for 12 million people in Central and Northern California. Many of those communities were hit hard over the weekend by heavy wind and rain, and they will be walloped again starting Wednesday.

In Los Angeles, where temperatures topped the high 70s less than two weeks ago, a cold front prompted local officials to declare a cold weather alert Tuesday as wind chill temperatures are expected to dip below 32 degrees in some communities.

The coming storm is the latest extreme winter weather to slam into the U.S. In recent weeks, storms have set records and knocked out power to hundreds of thousands of people across the country.

Atmospheric rivers, plumes of concentrated moisture that flow in the sky, can drive as much as 50% of precipitation that’s delivered to some parts of California. They’re often described as firehoses because on weather radar, they often look like jets of water vapor firing from the tropics.

The Center for Western Weather and Extremes, a research agency that lists atmospheric rivers on a scale of 1 to 5 based on the amount of water vapor they transport and how long they will linger, rated the coming storm as a category 3 event.

“This is a serious situation to be monitoring the forecast for and taking action,” said Marty Ralph, the agency’s director.

This atmospheric river is accompanied and intensified by a pattern of low pressure on the ocean’s surface offshore that is expected to “bomb out” and strengthen rapidly over the Pacific.

“It will become a meteorological bomb cyclone,” Daniel Swain, a climate scientist at UCLA and the National Center for Atmospheric Research, said in a YouTube briefing about the weather patterns behind the storm.

A bomb cyclone is a storm that intensifies rapidly. A strong one contributed to an arctic blast last month that brought deadly winter weather to much of the country.

The bomb cyclone isn’t likely to make landfall in California, but it will bring widespread strong winds and heavy precipitation that is likely to lead to flooding and mudslides, especially in Northern California, but also as far south as Los Angeles, Swain said in an emailed statement.

The cyclone will send a pair of warm and cold fronts over Northern California, which is already rain-soaked. And more storms could be coming.

“We’re locked in this prolonged wet pattern. It looks like it’s going to continue for awhile, in fact, really for the foreseeable future now,” said Swain, with models hinting at the possibility of more atmospheric river storms this weekend and into next week.

Because a warmer atmosphere can absorb more water vapor, atmospheric rivers are expected to grow stronger as the climate changes.

Flooding damage from atmospheric rivers in the West could double or triple by the end of the century, according to Ralph’s research, which modeled the results in both moderate and high greenhouse gas emissions scenarios.

This week’s storm will move in early Wednesday, and it is likely to bring even more rain and wind than a weekend storm that caused flooding and power outages from the Bay Area to the Sierra Nevada foothills.

In Sacramento, a New Year’s Eve deluge killed one person, prompted the evacuation of more than 1,000 inmates in a county jail and washed away a section of a levee system that protects mostly rural farmland.

Winds from the south are expected to gain strength throughout Wednesday, ushering in a cold front and an associated atmospheric river. Gusts are expected to reach 40 to 60 mph in the higher mountain ridges and peaks.

The state’s severe drought could offset some of the flooding impacts, Swain said. Although some smaller reservoirs in Northern California have filled up, larger reservoirs still have the capacity to absorb more.

The heavy rains are expected to help reduce some drought impacts.

“I think we will have largely alleviated the short-term drought in Northern California,” Swain said. “From a surface soil moisture perspective, a streamflow perspective, everything is going to look pretty good.”

He warned that longer-term impacts, like deficits in groundwater, deep soil moisture and forest health, won’t be corrected in a single season.